Today is Lucia in Sweden 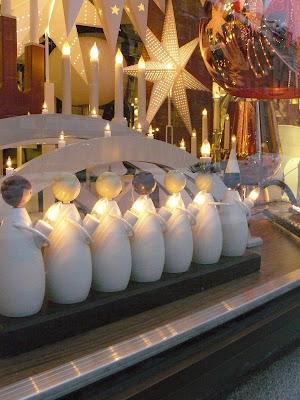 Today is the 13th of December and in Sweden and Scandinavia it is a special day as we celebrate Saint Lucia. It is the celebration of light and light is exactly what is needed the most here at this time of the year. In traditional celebrations, Saint Lucy comes as a young woman with lights and sweets. It is one of the few saint days observed in Scandinavia. In some forms, a procession is headed by one girl wearing a crown of candles, while others in the procession hold only a single candle each. In Sweden, Denmark, Estonia, Norway, and Finland, Lucy (called Lucia) it is venerated on December 13 in a ceremony where a girl is elected to portray Lucia. Wearing a white gown with a red sash and a crown of candles on her head, she walks at the head of a procession of women, each holding a candle. The candles symbolize the fire that refused to take St. Lucia's life when she was sentenced to be burned. The women sing a Lucia song while entering the room, to the melody of the traditional Neapolitan song Santa Lucia; the Italian lyrics describe the view from Santa Lucia in Naples, the various Scandinavian lyrics are fashioned for the occasion, describing the light with which Lucia overcomes the darkness. Each Scandinavian country has lyrics in their native tongues. After finishing this song, the procession sings Christmas carols or more songs about Lucia. A similar version occurs in Scandinavian communities and churches in the United States.

The modern tradition of having public processions in the Swedish cities started in 1927 when a newspaper in Stockholm elected an official Lucia for Stockholm that year. The initiative was then followed around the country through the local press. Today most cities in Sweden appoint a Lucia every year. Schools elect a Lucia and her maids among the students and a national Lucia is elected on national television from regional winners. The regional Lucias will visit shopping malls, old people's homes and churches, singing and handing out pepparkakor(gingerbread).
. 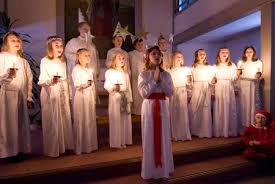 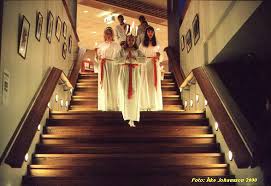 Pictures from the internet.
It is Lucia and Midsummer that are the two most traditional Swedish traditions.

Picture from the internet.
A traditional sweet bun baked with saffron is served on this particular day and is here kalled a “Lussekatt”. But they are eaten all through December and not just on this particular day. I baked some this year too. We usually eat them also for each Sunday in December leading up to Christmas eve on the so called “advent Sundays”. 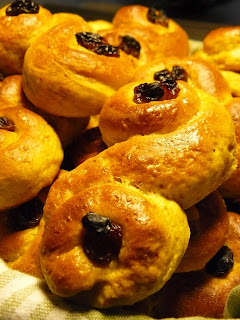 This is what the sweet saffron buns look like. They are also traditionally decorated with rasins. This is a picture of the ones that I baked this year. Happy Sankta Lucia to you all. 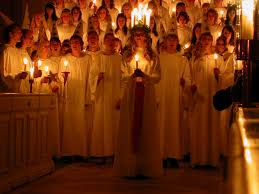