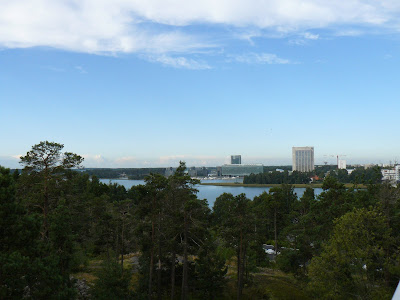 We are back now from Helsinki, Finland and our visit to our Alabama friends. Thank you Krister, Gretchen and little Lina for having us and for a couple of great days together. We had a wonderful time in Finland. Even if we did not spend more than a couple of days there we got to see quite a lot. Helsinki is a very nice city and very easy to see and walk around on fot. It is smaller than Stockholm, probably more the size to Gothenburg. We were lucky with the weather also and and had a great day strolling around the city. The picture above shows the fantastic view that K and G had from their apartment. They also had a large balcony so you could sit outside and admire the view from.

Here comes a lot of pictures. Here is our stay in Helsinki in pictures. 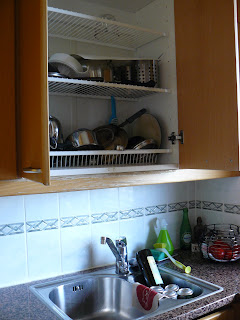 We learned many curious facts about the Finish people that we did not know about before. Drying your dishes in the cupboard above this sink is typically Finnish we learned. It it true that Finns love their sauna just as much as you can possibly imagine. Every apartment building has a sauna room that you can book just as you book the laundry room in Swedish apartment buildings. So K and C went down to enjoy the sauna time that had been booked Wednesday evening. 40 minutes sauna time and then you have another 40 minutes for shower and wash-up time. If you live in your own house all houses of course have a sauna. Finns even take their portable saunas with them when they go camping. 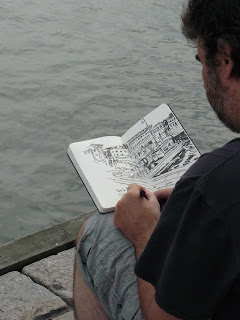 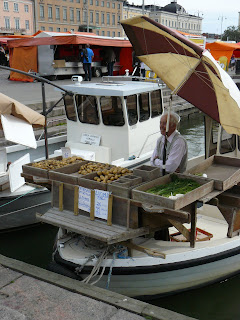 Thursday morning we took the bus into the city center. I saw this guy that was drawing a view of Helsinki that was just amazing. I wish I could draw like that. Then I saw this man selling potatoes from his boat that I thought looked very nice. A mini farmers market on water. Next to him there was a woman on another boat selling fresh fish. 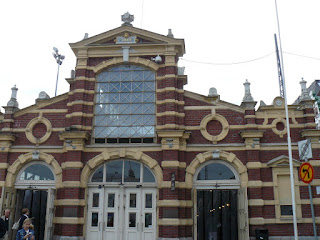 Me and C visited the old market (Saluhallen). Just as beautiful inside as the building is on the outside. 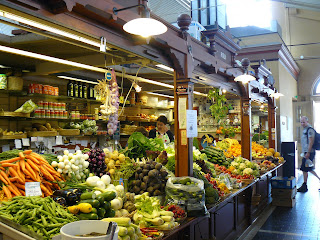 They had these small and very cute grocery and food stalls with all kinds of delicious and yummy goodies. 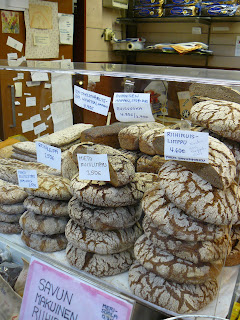 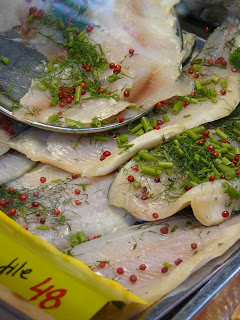 Of course I tried the Finnish bread. This is my kind of bread. I you love dark, healthy bread with a lot of grains you will love this as much as I do. Something else that was new to me was to see that in Finland they not only marinate (grava) salmon as we do in Sweden but also do it with other kids of fish as well. 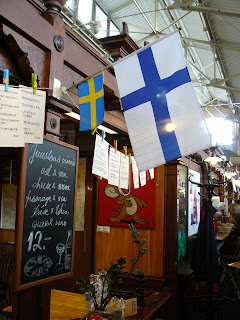 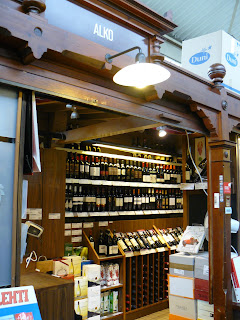 There were also a number of small restaurants here. You can sit down and have lunch or a bite of something. There was also a small liqour and wine store. I thought the name was a little bit funny as it is called Alco. 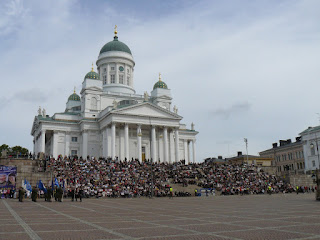 One of the most famous buildings in Helsinki is this cathedral. A lot of people had gathered here because there was some military award ceremony that was about to begin. 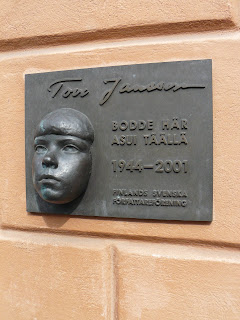 We passed by this building where Tove Jansson the author of the famous Mummin characters had lived. We had no idea she had lived here but just stumbled upon it. 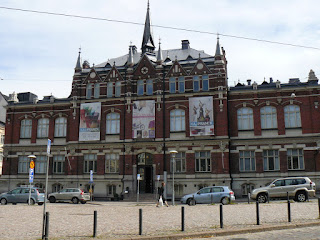 Something that I did very much want to go and see was the design museum so we walked here and entered. They had a fantastic exhibition going on about Kaj Franck a famous Finnish designer. The Finns really know their design stuff! I was so impressed and taken by the beauty of all the things I saw both in the design museum as well as the design forum shop that we also visited. I wish I had the money to buy most of the stuff as well as a large house so I could fill it with all of these beautiful things. 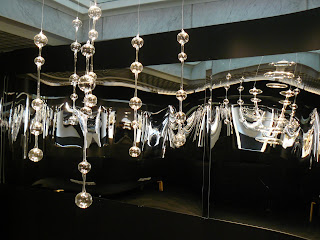 This was some glass sculptures that we saw at the design forum shop. The design is so simple and yet so beautiful. Lots of inspiration is taken from the nature and the outdoors. The most fantastic pieces are done not only in glass but also in wood as well as metal and ceramics. 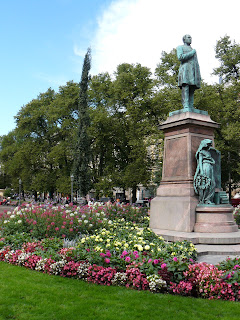 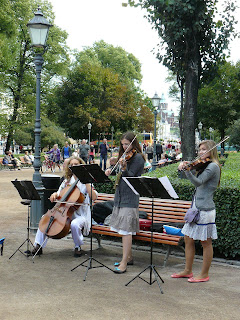 I lovely park that we passed that I don´t remember the name of. Lots of music, flowers and people. 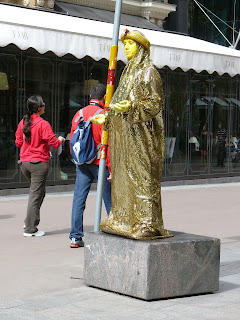 We saw this person dressed all in gold as well as being sprayed with gold color imitating a statue. 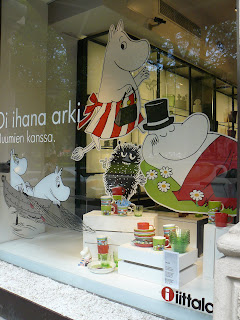 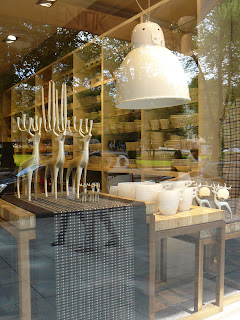 Of course I visited the Iittala shop as well as some other very nice stores. I bought some napkin holders at the Iittala store made by Alvaro Alto. 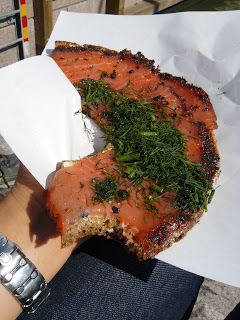 For lunch I had this very yummy marinated salmon sandwich that we bought at the old market. Then we sat outside in the sun looking out over the dock and boats. 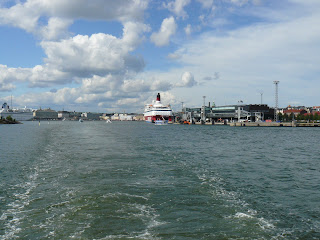 After lunch we decided to take a short boat ride out to the enormous fort called Sweaborg. It has a Finnish name as well but right now it slipped out of my mind. 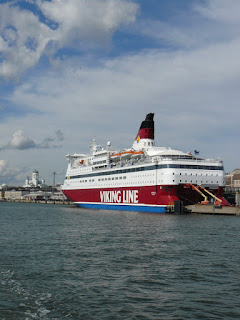 There were a lot of large cruising ships in the harbor both Swedish and international. 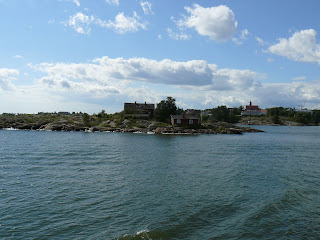 The boat ride out to Sweaborg took only about 20 minutes but it was really nice to get out on the water and to see Helsinki from a water view. Even if we did not get very far out into the Helsinki archipelago we still got to see a lot of beauty and small cute houses. 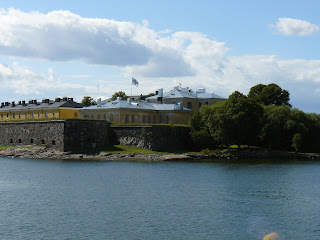 Sweaborg. This is the largest fortress that exists. Besides the fortress there is a church and many other buildings, museums and restaurants. 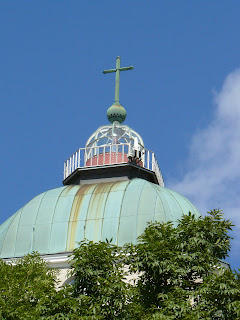 Not only is Sweaborg the largest fortress in the world but the church that belongs to the fortress is also unique as it not only serves as a church but also as a lighthouse. It is a combination of a church and and a lighthouse. First time ever I see something like this. 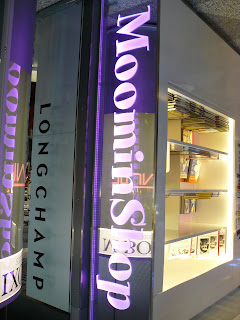 Tove Jansson´s Mummin figures are world famous and here in Helsinki there are special Mummin shops with all kinds of stuff with the many Mummin figures. 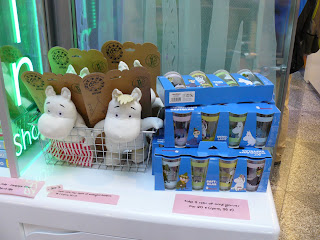 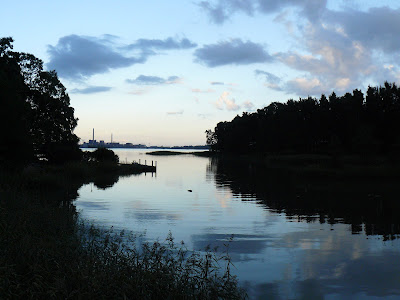 K and G lived on an island and it was very beautiful out there. Finland is known as the country of a thousand lakes and this is something that you can understand why as you are there. Helsinki is very much surrounded by water (the Baltic Sea in this case). There are not many high rise buildings in Helsinki at all. The tallest one K said was the energy building that you can see in the first picture. So Helsinki is not a city of sky scrapers. I am so glad we got to meet up with K and G and spend time together again. Thanks once again.
Posted by Desiree at 8:22 AM

One of the reasons why I like visiting your blog so much is because it has become a daily reference I can use in order to learn new nice stuff. It's like a curiosities box that surprises you over and over again.