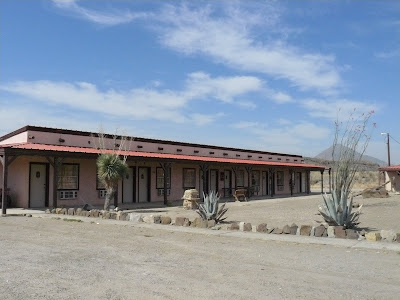 When we were at Big Bend national park in southern Texas there was just not many hotel/motel options. Even if there were cabins that one could book inside the park there are very few and these need to be booked well in advance. That is about a year in advance. Since we had not planned this trip so early we had to stay in the closest town to Big Bend which is practically somewhere out in the middle of nowhere or in the middle of the desert. We stayed in this little town called Terlingua. Well to be absolutely honest the motel was located about 12 miles outside of Terlingua. When we first arrived my first reaction was: oh my what is this. But the place was clean and had the simple necessities that we needed. The price we payed was a rip off but when there is not many options you got to take the place and pay what it costs. I guess they knew they could get away with the price as it is mostly tourists coming to Big Bend staying here and living options elsewhere is very limited. 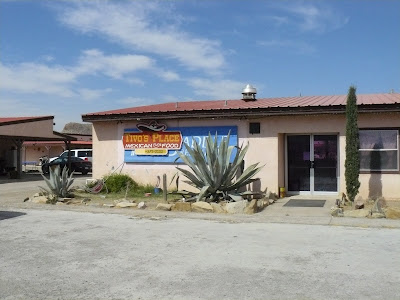 The owners were Mexican and they had this Mexican restaurant called Tivo´s place. We tried the food there one evening but honestly it was not that great. We were the only guests at the restaurant that night and we could hear a lot going on in the microwave and less going on in the kitchen. 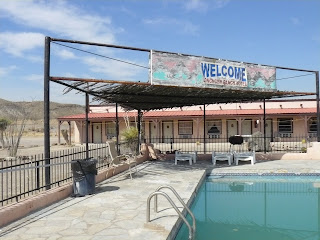 There was a pool but it did not look like anyone had used it in a long time. It did not feel like the place where I wanted to swim or hang around. Well we were not here to lie around a pool or hang around a motel room, we just needed a clean bed to sleep in and that is what we got. We were here to spend time in Big Bend.
Terlingua is a old former mining town where they once mined for mercury in the 1930:ties. The town is today claiming to be a ghost town. At leas the old part of the small town has big sign saying Ghost Town and so on but I would say it is a fake ghost town. 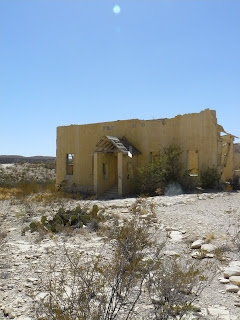 There was only one house that was a true ghost town house and it was this one. The rest of them had people living in them even if they were falling apart. For all I know one house does not make one town. We were quite dissapointed in our ghost town experience that we got here. 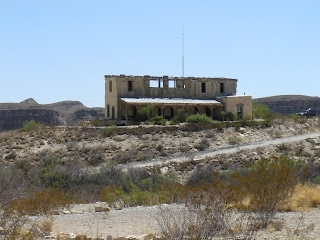 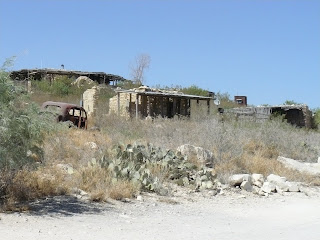 We drove around town and at first glance there appeared to be several houses that were abandoned and it looked very much like a ghost town but when approaching and getting closer there were cars parked by these houses and signs saying "private property, keep out". Even if they were missing a roof or falling apart there were all kinds of poor hippies and wetbacks living here. 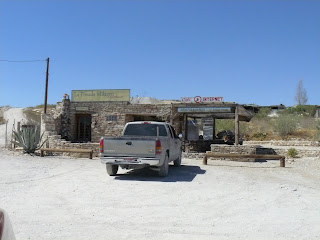 Some of the former ghost town houses had even been fixed up like this place. If you click on this picture you can read the sign that says Cafe and internet. One of the good things is that now days there is practically internet and wifi everywhere. Even our motel above had it. Great for me that tried to keep up with the blog as we traveled around. 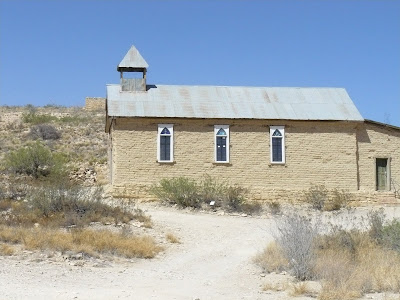 The Terlingua church was kind of cute. I think it was the old original church building only they seemed to have put in new windows. But for the ones going to Terlingua because they expect to find a ghost town - people don't bother because this is not a ghost town. Me and C joked about this and every time we passed a single abandoned house that was falling apart we would call out to each other " look - a ghost town!"
Posted by Desiree at 10:43 AM

It is the typical motel that it appears in movies. I would like to stay in a place like that.